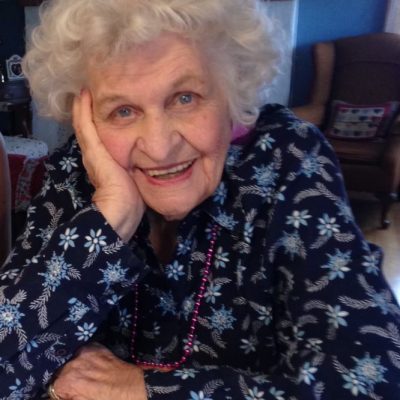 Virginia Greening Nisker of Tacoma was born on January 10, 1923, in Hardin, Montana, the daughter of Charles and Jewell Ross Greening. Jewell had come west from Iowa to homestead near Melstone, where she met Charles, a banker from Minnesota. Amid economic setbacks in the upper plains, Jewell and Charles moved their family out to Tacoma, Washington in 1925. Virginia graduated from Stadium High School in 1941.

Enrolling at Washington State College, Virginia followed the exploits of her brother Ross Greening, an Air Corps pilot and a survivor of the Doolittle Raid. She took a year off from college to work on the Boeing B-29 assembly line. Then in 1944, she enlisted in the Navy Women Accepted for Volunteer Emergency Service (WAVES), serving at the Hydrographic Building in Suitland, Maryland.

Following the war, Virginia went to work at Hanes Picture Studio in Yellowstone National Park in the summer of 1946. There she met Martin Nisker, an Air Corps veteran who was a night auditor at Old Faithful Inn. They fell in love and dated over the next five years. During that time, Virginia finished her degree at UCLA.

Virginia married Martin at the Presidio in San Francisco on January 13, 1951. In the Air Force once again, Martin left for Japan and Virginia eventually joined him. Follow-on assignments included Larson Air Force Base in Moses Lake, Washington, Donaldson Air Force Base in Greenville, South Carolina, Rosecrans Air National Guard Base in St. Joseph, Missouri, and Kindley Air Force Base in Bermuda. In 1953, Virginia gave birth to their first child, Gary Ross Nisker. Twins Kimmy and Nancy Jo were born in 1956, but Nancy Jo died a few days later. Charles Bruce was born in 1962.

Shortly after the family moved to Bermuda in 1964, Martin took part in a training mission in preparation for the Gemini Space Project. On June 29, 1964, Martin’s aircraft collided with another Air Force plane off of Bermuda, killing Martin along with 16 other airmen.

For Virginia and her three children, the road led back to Tacoma, where she found strength in family, and in friendships old and new. She rejoined the bridge club she started in high school, joined Mason United Methodist Church and P.E.O. Chapter CZ, and took part in an investment club.

In the late 1970s, Virginia went to work as a travel agent. Her own travels took her to five continents, and she biked extensively through Europe.

In 1995, Virginia reunited with her high school boyfriend David Christianson, who had recently lost his wife. For the next 16 years, Virginia and Dave were inseparable, traveling together and sharing daily meals. Dave passed away in 2011.

A sense of humor and a gracious spirit filled Virginia’s life. She loved holidays, a good game of bridge, and chocolate. Above all, she loved her family and her friends and held them close always. She is survived by her son Gary Nisker, daughter Kim Zeiger (Walt), and son Bruce Nisker; grandchildren Hans, Joe, Ross, Ashlyn, Lisa, and Kylee; and five great grandchildren. She is preceded in death by her husband Martin, daughter Nancy Jo, parents Charles and Jewell Greening, and sister Shirley Greening Morgan and brother Charles Ross Greening.

All are welcome to a celebration of life service to be held on Saturday, December 3 at 11am at Tacoma Bible Presbyterian Church, 6202 South Tyler Street in Tacoma. Virginia’s remains will be interred at Arlington National Cemetery.

In lieu of flowers, donations may be sent to the P.E.O. Foundation at https://donations.peointernational.org/peo-donation-foundation, marked in memory of Virginia Nisker with credit to Chapter CZ.