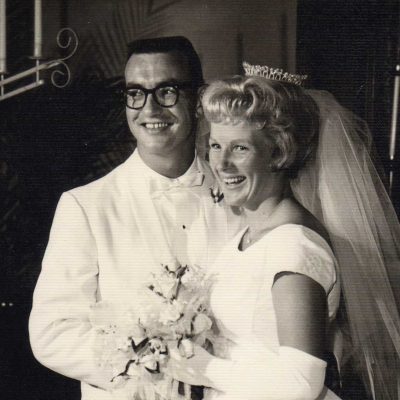 Richy was born to William and Evelyn Welch in Los Angeles, California, in 1935. He was a graduate of Mira Costa High School in Manhattan Beach. Janie and her twin brother Jack were born to Robert & Esther Mobley in Torrance, California, in 1943. After graduation from Gardena High School, Janie married the love of her life, Richy. They were married for 58 years.

Richy & Janie’s married life revolved around their mutual love of boating and waterskiing. Richy was a record-setting GN boat racer and Janie was a waterski racing champion and world record holder. When their daughter Lori was born in 1968, she quickly joined them in their waterski racing adventures. Most weekends were spent at the races on Lake Havasu, Mission Bay, and Chula Vista. Summer vacations were spent at the races in Clearlake, where Richy was known for his homemade ice cream and taking friends for ski rides behind their boat, “Big Foot.” They made lifelong friends through ski racing and frequently reminisced about the “good old days.”

When they weren’t on the water, Richy was a manager at United Parcel Service and a real estate agent. Janie was a beloved secretary at McDonnell Douglas and later Boeing. Following their retirements, they moved to Puyallup, Washington, to be closer to their daughter, Lori, and granddaughters, Jenna and Kristyn. They loved spending time with their grandchildren and were always there to cheer on Kristyn at soccer games or take photos of Jenna’s big events.

Richy and Janie are survived by their daughter, Lori Bostain; son-in-law, Anthony Bostain; granddaughters, Jenna and Kristyn Garn; bonus granddaughters, Gabriella and Mackenzie Bostain; Richy’s brother, Bill; and numerous nieces and nephews. A service with Army Honors will be held on October 29th at 1 p.m. at Willamette National Cemetery, followed by a Celebration of Life at Bill’s home in Kalama, Washington. There will also be a small family service in Lee Vining, California.