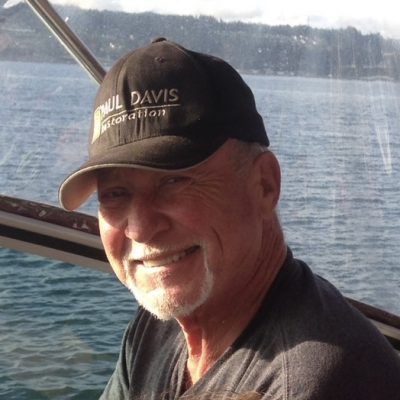 Ray was born June 13, 1943 in Selfridge, ND and passed away unexpectedly August 24, 2021 at his home in Port Orchard, WA. He graduated from Stadium High School and went to work for Boeing shortly after. To avoid the draft, he joined the U.S. Navy serving in AZ and The Great Lakes. After his tour, he returned to Boeing where he would retire as a Machinist General Manager. Ray was a hard worker, running his own painting business while working at Boeing and acquiring 19 rental properties. After retirement, he went back to work purchasing Paul Davis Restoration in Port Orchard. He wasn’t one to be able to sit still for long as he was always building, fixing or working on something. If you needed help he was the first to offer. Ray was a man with a sharp tongue and a quick wit, always making   everyone around him laugh and feel welcomed in his presence. His smile was contagious and would always light up a room. You never had to wonder what Ray was thinking because he would tell you whether you wanted to know or not. Ray was loved so deeply and will be missed but never forgotten.  Ray is survived by his children Raymond, John, Michael and Carolyn; numerous grandchildren and great-grandchildren; his beloved dog Ollie; a huge family and so many friends. He was preceded in death by his wife Tammy in 2020. Visitation will be held on Friday, August 27 (TODAY) from 6-8 p.m. with funeral services following on Saturday, August 28 at 11 a.m. at Tuell-McKee Funeral Home, 2215 Sixth Ave., Tacoma, 253-272-1414.