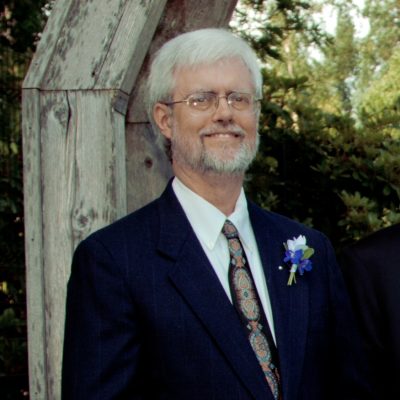 Raoul graduated from Charles Wright Academy in 1977. He met Lynne St Pierre, who would become Jacob and Stefan’s mother, in Tacoma in 1980. They were married in 1982 and moved to Bellingham, where their sons were born. Raoul was a computer programmer and stay-at-home dad. He particularly treasured the time he spent with his kids as babies and small children.

In 2004, Raoul met Lori in the Trinity Lutheran Church Cantate Choir, and they were married in 2008. Raoul joined Lori in her career as a homecare aide, which he excelled at for 11 years. They shared a love of music and movies, and enjoyed spending time together outdoors. They fit together remarkably. Lori was with Raoul constantly in the final years of his life.

Jacob and Stefan were very important to Raoul throughout his life. He was always available for a hike or bike ride, and enjoyed hearing about their projects and plans. Raoul gave the boys a strong foundation in computing concepts from a young age, which led to Stefan’s career in computer engineering and impacted how each of them think about the world.

Raoul always had his camera with him, and frequently also carried a monopod. He leaves behind thousands and thousands of photographs, organized in a complex system that was intuitive only to him. Raoul learned to love native plants from his father, Hal, and liked pointing out plants to his family. His favorite plant was the trillium.

Raoul’s parents were musicians who encouraged his love of music. He played viola from childhood, and sang with Jacob and Lori in various choirs throughout his life, including church choir and shape note groups. He was a natural musician who felt strongly about how music should be played. Raoul was also a life-long bicyclist. When he was no longer able to ride alone,
he and his wife learned to ride a tandem bicycle. It was a gift that he was able to continue riding until August of this year.
In lieu of flowers, Raoul asked that donations be sent to the Timberland Regional Library.