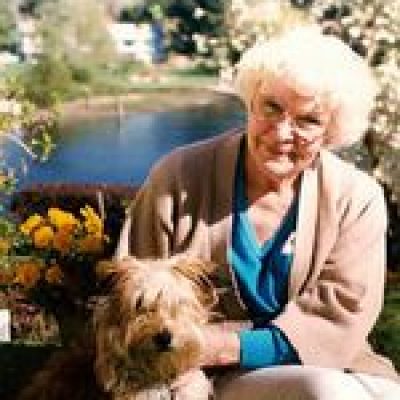 Lillian Philipsen Schroder Huggard Found her peace on August 4, 2007. Lillian was born February 11, 1911 in Orchard, Idaho to Thomas Peter Philipsen and Josephine Unruh Philipsen both of Denmark. Lillian lived forty one years in Gig Harbor, Washington. She was a licensed beautician for 45 years operating independently and serving a loyal following of clients in Gig Harbor, Tacoma, Yelm, Vashon Island and Bremerton until her retirement. Lillian’s love and commitment was to her family. She was the sixth of seven brothers and sisters and was the sole surviving sibling of the Philipsen family. Lillian was married to Robert Aaron Schroder in 1942 and had two daughters: Christine “Tena” Schroder Jones of Hillsboro, Oregon and Starla Schroder Globe of Olympia, Washington. Robert was killed in a farming accident in Yelm, Washington in 1963. Lillian married Harold Eugene Huggard in 1987 and the couple enjoyed twenty years of happiness traveling and sharing the lives of their children, grandchildren and great-grandchildren at their beachfront home in Gig Harbor. Lillian is survived by seven grandchildren and twelve great-grandchildren. Special thanks to the caregivers at ManorCare of Gig Harbor and Franciscan Hospice. A memorial service will be held on Saturday, August 18, 2007 at 2:30 p.m. at the Gig Harbor Elks Lodge, 9701 54th Avenue NW, Gig Harbor. Lillian’s remains will be laid to rest at Woodbine Cemetery with her siblings in Puyallup, Washington. Contributions in her memory may be made to Franciscan Hospice, 2901 Bridgeport Way W., University Place, WA 98466. She will be remembered for a well-lived and vibrant life. We will miss you, Gram! Please sign online guest book at www.tuellmckee.com. Arrangements by Tuell-McKee Funeral Home, 253-272-1414.