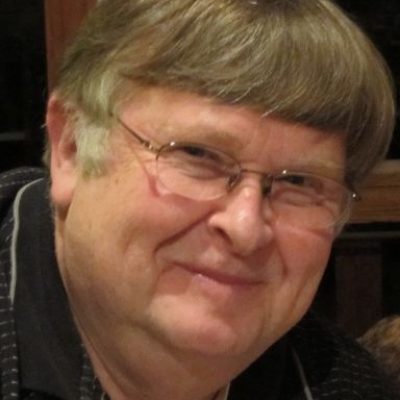 Our beloved husband, father, brother, uncle and Papa was taken from us on 10/25 by COVID-19, despite being vaccinated and following safety protocols.

Lee was born to William H. and Zilpha L. Haycox in Longview, WA, where his family owned a cannery. He grew up around his father’s business and learned the value of hard work. His mother had a lifelong love of learning, which she instilled in him through the appreciation of arts, science and music. He looked up to his eldest brother Bill, his sisters Zilpha and Nancy, and their cool boyfriends.

The family later welcomed his younger sister Lorna, and Lee became a doting older brother. He attended Mark Morris High School and played the French horn in the marching band, with his enthusiasm and spirit for the craft overshadowing any proficiency issues.

Lee joined the U.S. Navy out of high school and became an electronics specialist on board the submarine USS Remora. He excelled at this and moved up rank, but found a military life not suiting him, left the Navy after 6 years. He remained quietly proud of his service, and could always draw lessons back to it.

He met Mary Patricia Norton while helping a friend move, but she wasn’t really available or interested. Some months later she had a change of heart and they began a nearly 50 year love story, marrying after a short courtship. They bought their first house together in Kirkland and he attended the UW on the G.I. bill, earning a degree in accounting in the interest of expediency. He made fast and lifelong friends in the neighborhood, pursuing all manner of misadventure with them. He had a love for sports cars, boating, crossword puzzles, music, football and “The Bay Place”.

Lee and Mary had three boys – John, Chris and Willie. He was a proud and very fair father, parenting with equal weight between his values and humor. An avid DIY’er around the house, Lee involved the boys in many of his improvised solutions, in the mold of his own father. Driven by a desire to find the best solution, he researched exhaustively before any purchase.

He had a passion for making people happy, and would impatiently wait on others to take their first bite of a steak, leg of lamb he had made, or perhaps his famous cinnamon rolls. He laughed spontaneously and could add levity to any situation. He found joy in discovering the humorous side of the most ridiculous circumstances.

After raising their three children, Lee and Mary decided to downsize and move to a small retirement community in Orting. His love of home-grown produce led to the construction of a custom garden Raised Bed Growing System (RBGS), best viewed from his new deck built with the help of his neighbor Bill.

Lee was preceded in death by his parents William and Zilpha, and brother William Jr. “Bill”. He is survived by his wife Mary, their sons John (Erica), Chris (Brande) and Willie, and grandchildren Sean, Declan, Matthew, and Eleanor, and his sisters Zilpha, Nancy and Lorna (Dennis).

The family would like to thank the medical staff at Good Samaritan Hospital, Puyallup for their valiant efforts in trying to save Lee.

His wit, humor and overflowing love serve as an example to all his family and friends. He will be forever missed