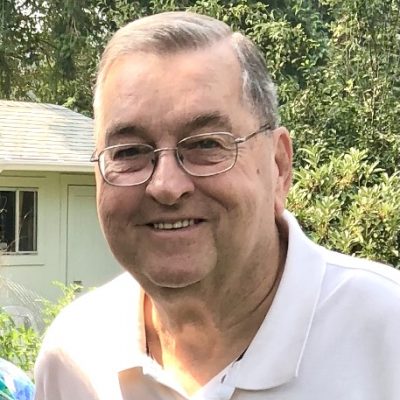 KENNETH DALE HARDY, 80 years old, passed away August 20, 2021, just 3 days shy of his 81st birthday, in University Place, WA.  Born at home in Cushing, TX, August 23, 1940, Ken graduated from Cushing High School in 1958, exceling in several sports, but was passionate about basketball.  After pursuing  jobs in the Dallas and Beaumont areas, he enlisted in the U.S. Army.  Beginning his Army career as an enlisted soldier, he eventually set his goal higher and became a paratrooper in the 101st Airborne.  The first time he flew in a perfectly good airplane, he had to jump out!  Completing his military duties (in his words) “three years, one month and three days,” he was led to the medical field.   Ken completed pre-pharmacy courses at Stephen F. Austin State University, then completed his education at the School of Pharmacy at Northeast Louisiana State College, which is now Louisiana University at Monroe.  In his senior year at Northeast he served as President of his class.   He subsequently held Pharmacy Management positions at hospitals in Nacogdoches and Lufkin.  After moving to the Pacific Northwest in 1992, he retired from the American Lake VA Hospital in Tacoma, WA in 2003.

Preceding him in death were his parents, Marcus and Juanita Hardy, and his oldest brother, Wayne Hardy.

He is survived by his wife of thirty-two years, Irene Dinning Hardy, of University Place, WA.  He is also survived by the mother of his children, Gale Hare Hutchison, his son Greg Hardy (Tammy) of Thornton, CO, his daughter Kim Hardy of Round Rock, TX, and step-children Scott Armsworth of Costa Mesa, CA, Todd Armsworth (Kellee) of Lovettsville, VA, and Leslie Armsworth Koutroulis (Stavros) of Seattle, WA.  Calling him “Grandpa,” “Papa Ken,” and “Poppy” are:  Ethan Rowe, Aiden, Connor and Rylan Hardy, and Stratos and Sofie Koutroulis, Brad Armsworth, Amanda Armsworth Johnson, and Stephanie Armsworth Herrera.  Ken was proud to have been presented with five step-great-grandchildren!

Mourning the loss of their nephew are Aunts Eugenia Boley (Nacogdoches), and Joan Wachter (Pensacola, FL).  Ken leaves behind his brothers and sisters:  Tom Hardy (June) of Orange, TX; John Hardy (Linda) of Nacogdoches, TX; Sandra Hardy Whittington, Corrigan, TX; Debbie Hardy Barr, Nacogdoches, TX, and numerous cousins, nieces and nephews, and many friends.  Special mention should be made of his good friend, Michael Callow (Tacoma, WA), who sat outside Ken’s window when he was confined to a skilled nursing facility, talking on cell phones as COVID restrictions required no visitors.  Michael is special as he planted flowers underneath Ken’s window, but was angered from the (perceived!) poor care Ken received when he had to go back to the hospital…so Michael dug up his flowers, replanted them in his own yard, and would have taken the potting soil back if he could have!

Golf was a sport Ken particularly enjoyed during his work years and on into retirement.  He especially loved golf in the Northwest because it wasn’t hot and you could play from sun-up to sundown without breaking a sweat!  Other pastimes include square dancing (but after breaking his hip from a fall on a concrete floor, he gave it up), traveling—Great Britain/Scotland/Wales, several cruises including his favorites to Alaska and the Panama Canal, telling stories, some true and some enhanced, and mowing his own lawn until he was 79 years before turning it over to a lawn service.  (He could hardly stand paying someone else to mow his lawn!)

Ken was a member of the Nacogdoches Lions’ Club, and after he and Irene moved to the Pacific Northwest he became active in the University Place Lions’ Club.  He served as President twice, Membership Chair numerous times, and the Scholarship Committee. He participated in and was responsible for many fund-raising efforts and community events during his membership.  As a result, he was awarded by his fellow Lions’ to receive the prestigious Melvin Jones Award.

Ken chose to come home to Cushing, TX, to be buried alongside his Hardy and Boley family members.  A graveside service will be held on Saturday, September 4, 2021, at 11 am at the Cushing City Cemetery, located ½ mile West of Cushing on Highway 204.  All who knew Ken are welcome to attend, to remember and honor his life.

Ken can be remembered through donations to the CHI Franciscan Hospice, 2901 Bridgeport Way West, University Place, WA 98466, or your favorite charity.