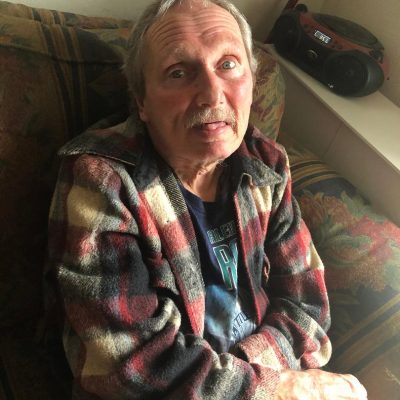 Died at age 70 in Bremerton Health and Rehab in Bremerton,Wa. with respiratory failure. Jim is survived by brothers, Bill Burnett (Karen); Mark Burnett; Ted Burnett and sister Jeanine Heeney (Ron). Also many nephews, niece, numerous cousins and other family members. Jim was preceded in death by his loving parents, Jim and Wilma Burnett.

Jim was born in Anchorage, AK in 1952. After approximately one year the family moved to Denver, CO where brother Bill was born. Shortly after a move to San Francisco east bay area where the rest of siblings were born and raised. Upon his parents retirement (1997) they moved to Silverdale, with Ted, Mark and Jim to follow (to be closer to sister Jeanine in Kingston).

Jim was a fighter his entire life. With eventual stabilization of his schizophrenia of which he developed around age 18. Jim worked many different service jobs as his illness allowed. Unfortunately he was left with tardive dyskinesia after initial treatment with antipsychotics. Jim through his life had many near life ending occurrences (too many to list)! He was always interested in his own intellect and family members.. guessing what their IQ’s were! He always loved music, mostly rock n roll! Through all his years would have his radio on to 102.5! He also LOVED coffee and did not go a day without numerous cups!

His mother Wilma always loved and cared for him unconditionally while advocating for as many social services of which were available until her death. His dad loved him always too.

We would like to thank all the caregivers whom helped Jim through the years and recently; the staff at Bremerton Health and Rehab (one year); Dr. D. Sharman; Dr. J. Matthews; Kitsap mental health including Dr. R. Reinach.

No words can describe our love and appreciation for Jimmy. His determination to live independently and persevere through mental and physical illness for years beyond whatever he was told! He was loved unconditionally!

We will have a celebration of Jim’s life on Saturday, February 4th, 2023 at 12:30 p.m. at the Hansville Community Center in Buck Lake Park in Hansville, Washington. We will be sharing our stories oh Jimmy (James) over lunch with family and friends.

A memorial fund is in process and will provide the information upon completion.