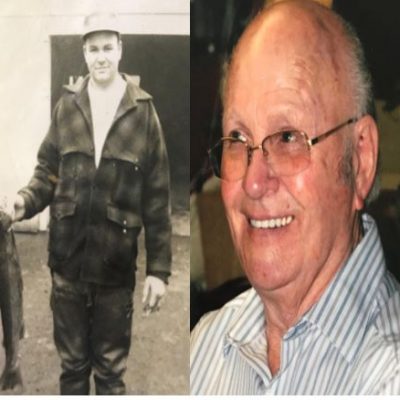 Born in Benton Harbor, Michigan, September 7, 1931 Gene G. Skanes was the third son to Arletta and George Skanes and fraternal twin to his brother Jack. Despite being born during The Depression, Gene’s childhood was carefree and full of adventure. Eventually, though, the lack of work took its toll on the family and when he was 11 his mother went to Detroit and drove a brand new, 1941 Ford off the assembly line to take her family west, where her husband and father-in-law were waiting. Gene’s mother sold their home, packed up her children and belongings, and left Michigan in search of a better life. Soon after their arrival, many of the Skanes/Morey clan joined the family and together they built everyone a home on a small street of land (15 lots) on what is affectionately called Hell Hill in Tacoma, Washington.

To meet him, you would have thought he had stepped out of a movie: Tall, athletic and handsome, proud and bold, Gene was not afraid to challenge a bad idea or action. His fierceness, however, was tempered with a kindness, generosity, and a deep and genuine love. This hero-warrior steadfastly protected and advocated for his family as well as the vulnerable; and he gently and passionately mentored his children and grandchildren to the same. He was the strong patriarch who did what needed to be done, even when it meant looking death calmly in the face.

If you knew him, you would know that Gene worked at the lumber mill for 37 years – through good times and bad – through strikes and bread lines – either pulling green chain, working as a unit stacker or on the planer chain. Always a strong advocate of justice, Gene was head Shop Steward for most of his working life and was Union Business Agent for 8 years. Gene’s passion for equality spilled over into his personal life where he was an advocate for those that had no voice. He spent many years canvassing for political candidates whose ideas would usher in a new age of progress that we enjoy today.

If you knew him you would also know that his greatest personal accomplishment was marrying Luann Fouke in 1960 and then having the opportunity to live alongside his children, grandchildren and extended family. He always believed in “family first”, “doing the right thing” and “putting your best foot forward”. Above all, he and Luann never gave up on family. They spent many weekends and vacations traveling long distances, regardless of cost, to support their loved ones. Gene and Luann opened up their home, wallets and hearts to their adult children and many grandchildren. Together they embodied the idea of “family”, “unconditional support” and “undying love”.

This gentille man, who was so much to so many, was renowned for his crazy, wicked wit, huge sense of fun, amazing (almost uncanny) cribbage skills, fishing, storytelling and cooking. But it was his kindness, grace, wisdom and unwavering love that were his most outstanding qualities. We are blessed and honored to have known him. We are thankful that there are many name sakes that will carry on his warrior spirit.

He died March 14, 2020 with his loving family around him. He is survived by his wife Luann, children Jeanne, Deanna and Chris, brother George, and many grandchildren, great grandchildren, nieces and nephews.