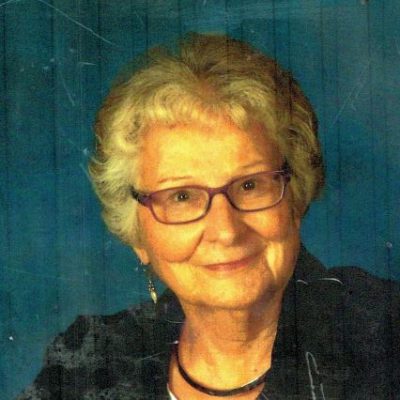 Edna May Hohbein was born August 4, 1931 on a farm west of a small town called Sweet Briar in North Dakota. She was baptized and confirmed at Peace Evangelical and Reform Church in New Salem. She was the youngest in her confirmation class (11), but on question Sunday she had to recite the Apostles Creed in front of the church congregation.
She graduated from New Salem High School in 1949. She chose to spend that summer at home like she always had since she was 10 years old. She always worked during the summer for relatives. She watched kids, weeded gardens, and prepared meals. This is where she learned to make fried egg and tomato sandwiches. In the fall of 1949, she got a job at First National Bank of Mandan. She spent September of 1949 until March 1950 working there, though she had a very tough boss, which turned out to be a blessing. Irene Thieson taught her every job but being a loan officer. Irene helped her when computers came into banking, as no one knew how things got to General Ledger.
Edna married Donald Hohbein on May 7, 1950 and then in April 1951 they moved to Tacoma, Washington. Since bank pay was so low, banks always needed help. She worked for National Bank of Washington which later became Wells Fargo, which was the holding company for First National Bank of Washington. She also worked for First Interstate Bank while Don was in the Army from 1952-1954 as well as the Bank of California.
Edna Spent 42 years in banking. With her experience gained, when automatic banking came to be she was included in the bank conversions, including first Interstate of Alaska. She returned On August 31, 1991 to spend time with her husband who had suffered several strokes and passed away in September of 2000.
Since his passing, she began to travel the world, which Don and her had talked about in the past, as well as cruises. they loved them because they didn’t need to pack and unpack again and again. she toured Europe in 2005 with several friends, and also traveled to Turkey and Greece, retracing the footsteps of John, the writer of the book of Revelations. She also traveled to several cities where Paul traveled during his ministry. She traveled to Panama and toured the Panama Canal.
Edna participated in three mission trips with her church. One was in Mexico to construct a house. She took her second mission trip to Beloxi, Mississippi, where she helped refurbish houses that were damaged by flooding. her final mission trip was in Centralia, WA.
One of the things she enjoyed the most was serving on the visitation team for her church, and assisting her friends when they needed it. her longest service was to Florence Irene Benedick for 8 years. She also enjoyed serving communion to the people of King’s Manor Assisted Living, and her special visits to Mavis Olson.
Edna has three children, Virginia, Duane, and Lynn. She also has eight grandchildren and eleven great-grandchildren.
Edna will be laid to rest with her husband Don at Tahoma National Cemetery in Kent, Washinton.