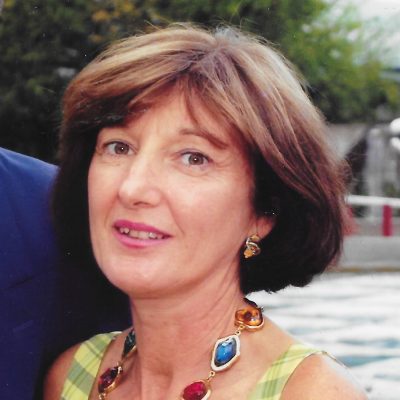 Early in the morning hours of June 11 Delphine lost a long and valiant fight with MSA (Multiple Systems Atrophy). She passed away peacefully and at home. She was generous, gracious, gifted, full of life and love and dedicated to make the world around her better and happier. She will be greatly missed by her family and friends, both here in Tacoma and in France.

Delphine was college educated in architecture and interior, as well as graphic, design. After a career working in France and in the USA for various architectural firms she decided to stay at home to raise her children, though she used her many talents for the benefit of her friends and numerous non-profit organizations to which she was dedicated. Quick to learn she embraced the digital world and turned it into solutions for the benefit of those organizations and persons she helped, she was often recognized publicly for her work as all appreciated her skills and her willingness to take charge of projects. Always willing to challenge herself she expanded the range of those skills along the years in anything that was required to help: finance, board participation, cultural events. She also worked closely with schools, helping with fundraising or tutoring.

Ultimately her goal was to make things better, easier, and more enjoyable for all. And she was always happy to help people understand and appreciate French culture, either in her adopted homeland or by taking them to France for an “immersion” experience during one of her annual stays in France; something she also did with her children who thus greatly benefitted from their heritage.

Delphine MAURICE was born in St Mandé, France, the oldest by 18 months of two sisters, to Pierre MAURICE and Aliette FREMON. After a short stay in Germany and the birth of sister Virginie, Delphine lived with her parents in various regions of France wherever her father’s jobs would take the family. They finally settled in Paris where Delphine went to high school and graduated in 1968. She stayed in Paris through her college studies and the first part of her active career.

She met François-Paul BRIAND for the first time in December of 1972 in Paris and after François completed his college studies and French military service they were married on July 5th, 1980. That very same year, after their honeymoon, they packed their bags and moved to the USA, arriving in Houston, Texas in October. She worked until the birth of François-Charles in 1982, continuing to work as a freelance designer from home. In the summer of 1984, the family moved to Colorado Springs, Colorado where Pierre-Yves was born in the fall of that same year and in 1986 Clémentine joined the family. After a very short stay in New Jersey, the family moved to Tacoma which would remain Delphine’s home for the rest of her life, though she very much enjoyed her summers in Dinard, France.

Along the way she made many friends and helped many people, who all remember not only her skillful and creative contributions but her warm and caring personality.

She is survived by her husband, her three children, her daughter in law Jessica and granddaughter Lily Aliette, as well as her sister Virginie, her brother in law Bertrand and seven nieces and nephews and their families.

In France a remembrance gathering will happen (probably) in September. A local ceremony will occur when appropriate. You can honor Delphine’s memory with a donation to the Children’s Museum of Tacoma, the Tacoma Garden Club, the Grand Cinema, Annie Wright School or any education institution of your choosing. Feel free to add a remembrance to the attached guestbook.

Also in the guestbook please read Virginie’s remembrance of her sister.