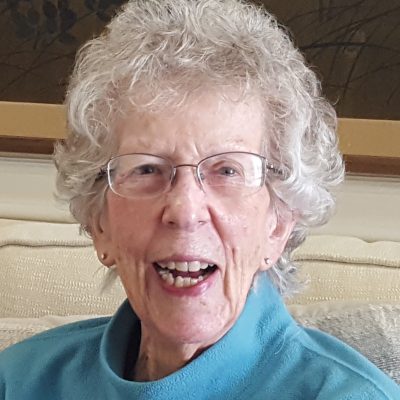 Wife, mother, grandmother, sister and good friend, Daisy D. Gaines left us February 18th, 2021 after 97 years. She is survived by her three grateful sons: William (wife Susie) of Tacoma, Donald (wife Sue) of University Place, Robert (wife Kathy) of Newcastle, and her grandchildren Ryan (wife Lisa), Kara, Amelia and Slater.
Born in Auburn Washington on January 12, 1924, Daisy was the elder of two children. She was predeceased by her parents Harold and Daisy, brother John, and husband Eugene.
Daisy graduated high school at Auburn Washington, and as a young woman was employed by AT&T and the Bell telephone companies. After seeing all of her sons off to college, she returned to employment with Pacific NW Bell for a few years.
Daisy married Eugene Gaines at Auburn Washington on August 23, 1952. Longtime residents of Tacoma and members of St. Luke’s Episcopal Church, they spent 51 loving years together. Daisy and Gene were very proud of their three sons. As parents they can rest peacefully knowing that they are largely responsible for their son’s advanced degrees and career accomplishments.
Daisy enjoyed family gatherings and vacations, sailing with her family on Puget Sound, and annual family trips to Lake Chelan. Later in life Daisy and Gene enjoyed extensive international travel for leisure and to visit relatives in England and New Zealand. As collectors of Asian art, they were among the first to visit mainland China after it was opened to Western tourism in the late 1970’s.
A private graveside service will be held on Friday, February 26th at Auburn Mountain View Cemetery. Memorials may be made to St. Luke’s Episcopal Church or a charity of your choice.