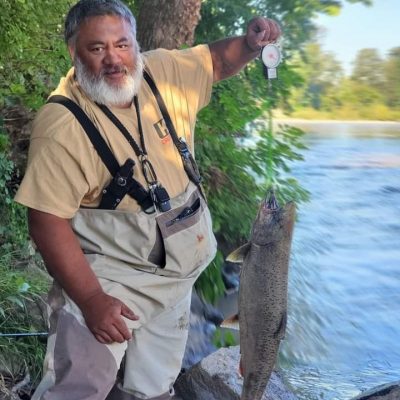 Born in American Samoa, he was the son of Lauvale Taemo’o and Sulesa Levu. Apelu made his way to the United States at a very young age. His grandmother Vaigalepa Schwenke had a huge hand in raising Apelu to be the man who he became. Most of his childhood and young adult life was spent in Long Beach California where he survived many of life’s adversities. With very humble beginnings, Apelu learned to be grateful for all that he had. He gravitated to Tacoma, Washington at the age of 23, where he resided, started a family, and created a life of his own, until the day he gained his wings.

Apelu was a loving husband, father, grandfather, brother, uncle, nephew, and friend. He was a man of few words. When he decided to speak, he spoke with honesty and love. He was an avid outdoorsman and gun collector. He enjoyed fishing with his family and the peace that came with nature’s beauty. He was a simple man that enjoyed life’s simple pleasures. Apelu also spent many years playing darts and at one time was a Grand Master through ADOI. He established many friendships during his time of competitive play. A few of these friendships grew to become a part of his family circle. He is remembered as a proud family man that would go to the ends of the world to protect his family. He was a proud American. He stood firmly in his political views. Through his journey in life, he was blessed, and blessed those who came in contact with him. He is loyal to a fault and did anything for his family and friends. Apelu is now fishing in the sky and smiling down on all those he loved. May his memory and legacy live on through all of us.

He is survived by his wife Ellen, his children Gage Island, Tasha Hicks-Miller, Joey, Josh, and Brandon Niz. His grandchildren Audrey, Noah, Mayleena, Brandon Jr., and Elijah. His parents Lauvale Taemo’o and Sulesa Levu. His brothers Saumani Pouvi, Sam Omeli, and Junior Taemo’o. His sisters Betty Alailefaleula, Sally Tapasa, Janet Anthony, Veronica Faleafine, and Tamara Lea’ana. Apelu also has many aunts, uncles, cousins, nephews, and nieces that share in countless memories and contributed to his joy for life while here on earth.

Celebration of life will be announced in the near future.